PD-L1 is a key inhibitor of T cell activation that is often over-expressed in cancer to escape immune surveillance and promote tumor progression. Blocking antibodies against PD-L1 or its receptor, PD-1, have shown significant clinical benefit in some patients with PD-L1 expressing tumors spurring great interest in this tumor target. Most of the anti-PD-L1 therapies currently in the clinic have been generated by standard hybridoma technology.

Beacon® Optofluidic System is capable of screening thousands of plasma cells, which speeds up a traditionally time-consuming hybridoma process. To evaluate the antibody discovery capabilities of the Beacon platform and compare it to the well-established hybridoma approach, we ran side-by-side antibody discovery campaigns using the two methods. For this study, our team did the following:

The B Cell Cloning (BCC) Approach

A total of 33,377 plasma cells were screened from PD-L1-immunized mice and the secreted antibodies were tested for binders to PD-L1 and blockers of the interaction between PD-L1 and PD-1. The screening assays were completed and a total of 35 antibodies (BCC-Abs) that bound PD-L1 and blocked the interaction with PD-1 were identified on the day the mice were sacrificed. Single cell sequencing allowed the team to recover 24 paired VH/VL sequences, of which 23 could be expressed and purified.

A total of 144 96-well plates entered the laborious and time-consuming screening and subcloning funnel that produced41 antibodies (Hyb-Abs) that bind to PD-L1 and block the interaction with PD-1 in the primary screen (See Figure 1).

Figure 1: Flow Scheme of Immunization and Antibody Screening. Using the Beacon, the single cell cloning process drastically reduces timelines and screening efforts because the initial screening on the Beacon can be done the same day of animal sacrifice, while it takes up to 4 months using a standard hybridoma process.

The Difference is in the Data

After the primary screens, purified BCC-Abs and Hyb-Abs were used to re-confirm and characterize more in detail their functional properties like:

Both approaches produced false positive hits, for which binding to and blocking the PD-L1/PD-1 interaction could not be confirmed. This false positive rate was lower for the single cell cloning approach (17%) vs. the hybridoma approach(32%).

Affinities of the mAbs were similar for both approaches, with 10% of identified mAbs having a pM affinity, and 25-28% single-digit nM affinity. When quantifying the ability of the mAbs to block PD-L1/PD-1 interaction, the BCC approach on the Beacon revealed its second biggest strength next to the reduced timeline: 22% of BCC-Abs showed better blocking ability than 3 benchmark antibodies (BMS, Roche, Medimmune). None of the hybridoma mAbs did this. Additionally, 61% of the BCC-Abs had a similar blocking ability compared to 27% for the Hyb-Abs. The data is summarized below (See Table 1).

Table 1: Overview of Beacon® and Hybridoma Process and Results. *Through optimization of sequencing workflows, the recovery rate could be increased to >95%.

Ready to talk about your antibody discovery project?

Our team is ready — the more challenging the better!

Check out our other Antibody Discovery with Beacon content →

Accelerated Discovery of Unique Anti-PD-L1 Antibodies from Spleen Versus Bone Marrow of Immunized Mice by Single Plasma B Cell Cloning on the Beacon® Platform. 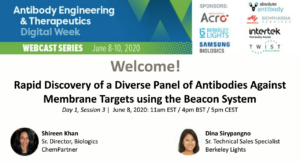 Rapid Discovery of a Diverse Panel of Antibodies Against Membrane Targets Using the Beacon® System.

Andreas Loos, PhD is a Director of Biologics Discovery at ChemPartner’s South San Francisco site, where he leads a team that has expanded ChemPartner’s capabilities into single B cell cloning using the Beacon platform. Prior to joining ChemPartner, Andreas has led an antibody discovery and assay development group at Aridis Pharmaceuticals. During his PhD and post-doctoral training in Gent (Belgium), Heidelberg (Germany) and Vienna (Austria), he studied production and post-translational modifications of biologics in plants.